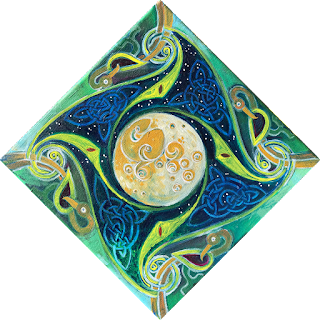 #celticmoon #moon #celticart
Posted by Sam at 3:57 PM No comments: 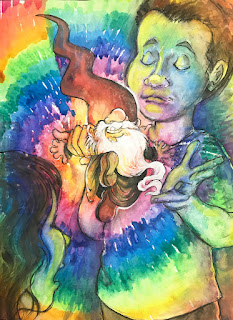 He needn't look so smug. Catching supernatural creatures in the hope of magical gain almost never works out.

This was a bit of an experiment. My daughter asked if she could paint in my sketchbook, so she made a tie-dye pattern. She didn't like it, though, so I asked if I could paint over it instead. I've never tried painting over tie-dye before, I liked the randomness of the field I was working on.
Posted by Sam at 10:58 AM No comments:

My daughter was helping with the homemade bread, and decided to make the loaves look like frogs. But after the dough rose and they were baked, they looked... like goblins. But since I like goblins too, I decided to draw what I saw. 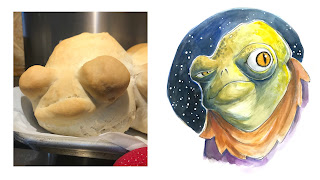 The "ineffectual lackey" goblin. He will be given tasks that he will invariably fail. 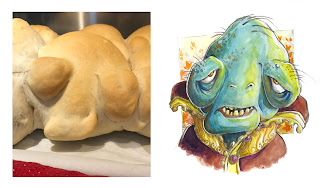 This one is just so done. And, for good measure, the whole gang together fresh out of the oven. They were delicious! 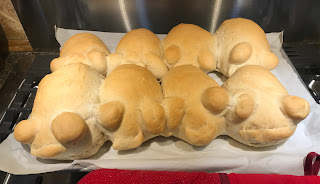 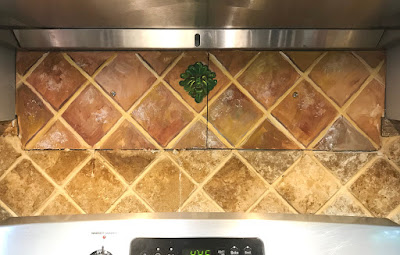 When we replaced the microwave over the oven with a hood vent, it left a big hole where the tile was. So I put up some wood to protect the wall, then painted it to protect the wood. And THEN I got a little carried away, especially since this was just a temporary thing until we could get a real backsplash.

But, y'know, I just couldn't help myself once I got started.
Posted by Sam at 12:48 PM No comments: 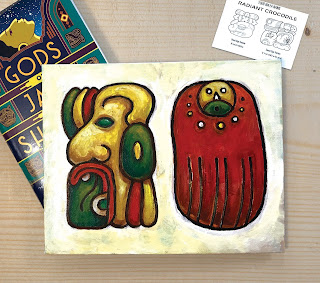 My daughter asked me what good modern books I'd read recently (she had to specify, because I'm likely to say something from the 15th century or something), and I said one I really loved was "Gods of Jade and Shadow" by Silvia Moreno-Garcia. And I DO recommend it - well written, fast-paced, and with Mesoamerican mythology as well.

And THAT book reminded me that I've been wanting to do more Mayan and Aztec art. So I looked up how to phonetically spell my name in a Mayan dictionary (as one does) and came up with this. 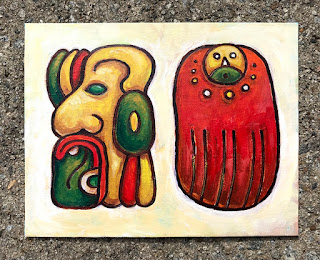 It's technically the phonetic sounds for "sa ma," which sounded close enough for me. Although I 'm hoping I read that right, and I didn't spell out something awful in Mayan.

And speaking of Mayan names, we saw a Mayan exhibit at the Museum of Science in Boston. They had a name generator, and I got a print-out not of my name, but a name I COULD have were I Mayan. I got "Radiant Crocodile," which I may just have to use from now on. 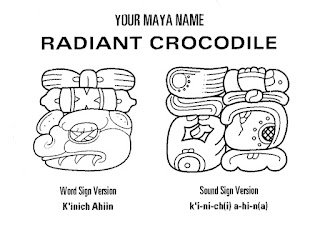 #godsofjadeandshadow
Posted by Sam at 7:08 PM No comments: 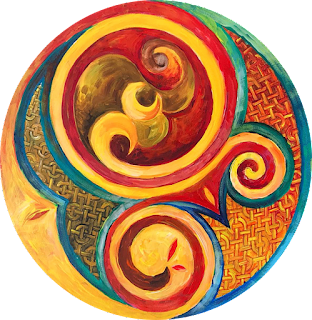 Now, I love representational art and figure drawing and all. But every once in a while, I have to go back to my artistic roots and bust out some Celtic artwork. Instead of doing this in ink outline, or vector, I decided to go all painterly on it. Had such a great time this won't be the last.
Posted by Sam at 4:09 PM No comments:

A Shelter in Place Easter 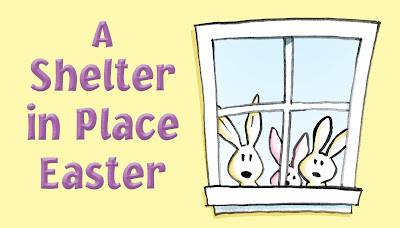 Everything we tried to order for Easter baskets were sold out! While the Easter Bunny has been called an "essential worker" (by Jacinda Ardern, New Zealand's Prime Minister!), it occurred to me that we might not be the only home where he wouldn't be able to deliver. So I wrote this book to give a little Easter cheer to the kids.

I wanted to put it out there for free, since I hope and pray that a "shelter in place Easter" is a once-in-a-lifetime event. If all goes well this storywill be completely irrelevant by next year!

Here is the link to the whole book: A Shelter in Place Easter: book
Posted by Sam at 8:31 PM No comments:

I've been wanting to paint this guy since we went to Colonial Williamsburg a couple years ago. Glad to finally get a chance to paint this! Granted, looking forward to when we all don't have to shelter in place, but getting some art done at least.

Let's all respect and love our elders 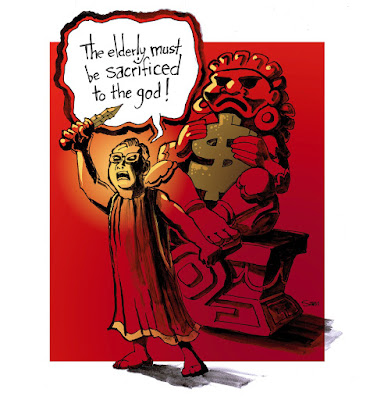 Up to now I've never, and I want to stress never, posted anything political. But seriously, Texas Lt. Gov. Dan Patrick? I couldn't help myself if you're going to say things like that.

And I'll take any excuse to do Aztec art as well.

Jack and the Social Distancing Beanstalk 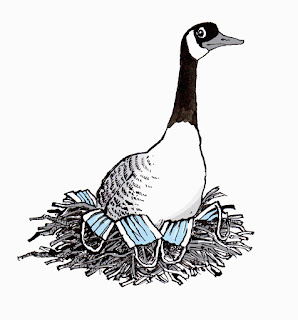 Once upon a time, there was a boy named Jack. He and his mother lived in a hovel on the edge of the forest. Initially, it had seemed like an isolated shack; now it was desirable distance away from everyone. On the other hand, they still needed supplies.
“Jack!” called his mother. “Take this wheelbarrow full of money, and go down to the markets on the Amazon River to buy hand sanitizer!”
“Just one wheelbarrow?” he asked.
“Well, get a small bottle anyway, if they have any,” she snapped. “Now, off with you!”
He obliged, but on the Amazon, there wasn’t any hand sanitizer, at any price.
Glumly he went back home, when up popped a stranger.
“Hi there!” the little man chirped happily. “How would you like to buy some magic beans?”
“Sure, if you can pass them to me from at least 6 feet away,” agreed Jack.
The bag of beans were tossed to him, but Jack happened to sneeze before he could hand over the wheelbarrow, so the little man just ran away.
“Hi Mom, I’m back!” he called. “I still have the money, and I got some magic beans too!”
“You don’t know where they’ve been! Throw them out!” she screeched, so he did.
The next morning, a beanstalk had grown outside the hovel, reaching all the way to the sky.
“Now THAT’S what I call social distancing! I’m outa here,” he said, beginning to climb.
At the top of the beanstalk, he saw a gigantic castle in the clouds. He snuck in, and saw a titanic giant amidst all his hoarded treasures. There were rolls upon rolls of toilet paper; hand sanitizer was stacked up in enormous barrels; and there was a goose that laid an unlimited supply of face masks.
Jack took one look at the giant, and decided what to do. He coughed.
The evil giant, hearing this, ran panicked out of the castle, fell down the hole where the beanstalk was, and smashed to bits on the ground.
Jack lived happily in the castle, and, since he had so much, he was willing to share his treasure with others. By throwing it down, of course; there was no way he was going back down there.

Sam
Boston, Massachusetts, United States
I'm a full-time illustrator (and sometime writer). For art, please visit my art blog at art-sam-ples.blogspot.com. For a lunch-time story, please see my other blog at http://lunch-note-project.blogspot.com/